No Result
View All Result
Home Health and Fitness

by Elizabeth
in Health and Fitness, Street Gists
0 0
0

The quest for bigger butts is one trend that is seriously taking over many women of this new generation, many have been wondering how most women suddenly grow big butts within weeks or months, well, there seems to be a revelation to it.

A medical doctor on Twitter has revealed that a large number of women now Inject seasoning cubes into their butt to make it bigger.

He also warmed that the effect of that could lead to ‘death’.

The doctor who goes by the name, Silas Joy, M.D (OfficialsilasMD) shared an old video of a documentary where women who have involved in the practice opened up about injecting seasoning cubes with hopes that the sodium and oil in it will make their butts lager.

Here’s what he posted. 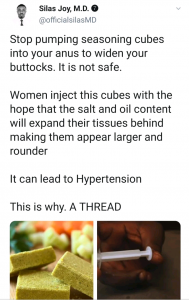 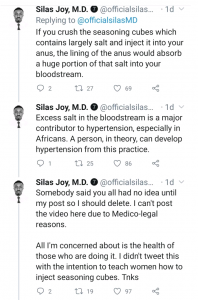 However, many on his comments section says it’s not a new thing since some women in central Africa has been doing it

Angry Mob Beat Man To Death For Killing Betting Shop Manager, One Other Over N50 In Imo