For about 24hours now, social media has been buzzing over the death of the CEO Of Cash nation entertainment, Kashy.

His famous artiste, Barry Jhay was fingered in his death as reports has it that he had a fight with His boss before he died, though some claim it was a suicide case.

Also, it was reported that Barry Jhay has been arrested in Ghana over connection in the circumstances that led to the death of Kashy.

However, a new update has been released that proves the innocence of Barry Jhay in the whole saga. In the revelation, Barry Jhay was beaten by Kashy and quickly rushed to the police station to report the assault case. On reaching their apartment, they discovered that Kashy had died. 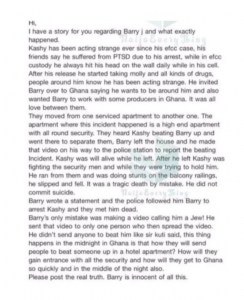