by Elizabeth
in Politics, Street Gists
0 0
0

According to reports, the Benue State Government has impounded 376 cows and arrested six herdsmen for flouting the anti-open grazing law.

Deputy Governor of the state, Engineer Benson Abounu, who disclosed this to newsmen in Makurdi, on Wednesday, January 27, said 376 cows and six herdsmen were apprehended in Kaseyo, Guma Local Government Area of the state, stressing that the herders were being investigated by the authorities.

Abounu raised alarm over renewed influx of armed herdsmen with large herds of cattle into parts of the state.

He noted that investigation following the declaration by the Nasarawa State Governor, Abdullahi Sule about regrouping of Boko Haram insurgents at the boundary between Benue and Nasarawa uncovered mass presence of cattle along River Benue in Agatu and Gwer West Local Government Areas.

According to the Deputy Governor, security checks revealed the invasion of armed herdsmen with AK47 riffles and large herds of cattle on the brink of River Benue on the Nasarawa State bank.

“While we are still investigating the declaration made by Nasarawa State Governor of the presence of Boko Haram at Benue/Nasarawa border when we noticed massive deployment of herdsmen on the brink of river Benue on the bank of Nasarawa State,” he said. 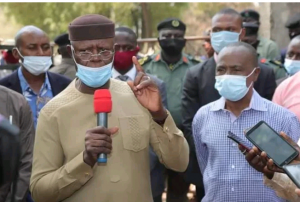 He stated that in keeping with the Open Grazing Prohibition and Ranches Establishment Law of the state, the cows were kept at the quarantine centre in the state and would be released to the owners after fulfilling the necessary conditions.

The Deputy Governor noted that Benue is governed by laws, one of which prohibits open grazing being enforced effectively with the primary aim of ending conflicts between herders and farmers.

Abounu while urging livestock farmers to acquire land in the state through lease for their businesses said Benue is not in anyway contemplating abrogating the law for any reason.