by Olufemi
in Entertainment
0 0
1

Today Sunday February 14, 2021 the Memorandum of Understanding (MOU) for the Revamping and Restoration of the National Theatre was signed between the Federal Government and Central Bank of Nigeria/Bankers Committee. Also signed is the contract awards for the project.

The signing of the MOU and contract awards was witnessed by the Host Governor, Babajide Sanwoolu of Lagos State, Governor of Central Bank of Nigeria, Godwin Emefiele, Honourable Minister of Information and Culture, Alhaji Lai Mohammed, Mr. Sunday Dare, Minister of Sports and Youths Development, CEO of Access Bank, Herbert Wigwe, General Manager/CEO of National Theatre, Prof Sunday Ododo, fsonta, FNAL and the Director of Legal Ministry of Information and Culture, Mr Nnanna Ibom, in a very colour ceremony held at the Entrance ‘A’ of the National Theatre. 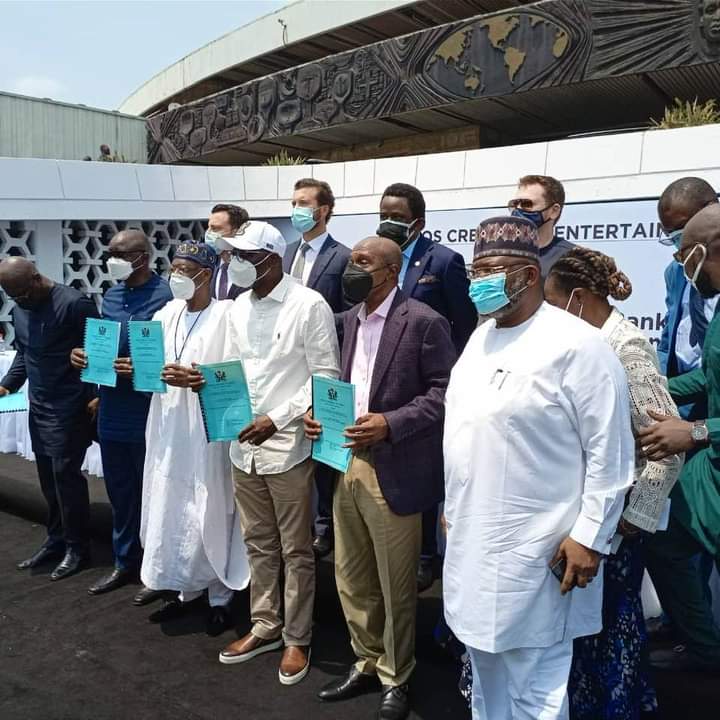 The CBN Governor stated that the Renovation project is expected to take 15 months to complete. Speaking before the signing, the Honourable Minister of Information and Culture, Alhaji Lai Mohammed retirated that this renovation will not lead to a
single job loss, rather it will lead to the creation of at least Ten Thousand direct jobs. Aside, the restoration of the iconic edifice, the Lagos Creative and Entertainment Centre (LC&EC) is to be created inside the National Theatre. Complex. The LC&EC is to consist of four Hubs: Films, Music, IT and Fashion.

It will be recalled that this signing is the culmination of a journey that started July 12, 2020 when the National Theatre was officially handed over to the CBN and Bankers Committee for Revamp and Restore.

This signing coming merely days after the Wednesday 10th February, 2021 FEC (Federal Executive Committee) approval shows the seriousness and speed being committed into this Project. And from the pictorial projections which the Project Managers put on display, the National Theatre is finally going to be the number one event Center in Africa upon completion.

Some Of The #EndSARS Protesters Are Thieves- Minister of Defense, Bashir Magashi, Claims