No Result
View All Result
Home Security and Crime

by Elizabeth
in Security and Crime, Street Gists
0 0
0

Former Aviation minister, Femi Fani Kayode has reacted to the recent order by the inspector general of police to arrest Sunday Igboho over his notice to Fulani Herdsmen.

Mr Femi Fani Kayode said it would be dangerous, reckless and counterproductive of the Buhari-led government to arrest the activist, Sunda Igboho, who gave a quit notice to Fulani herders in the state.

According to recent reports making the rounds, the Inspector General of Police, Adamu Mohammed, ordered the Commissioner of Police in Oyo state, Ngozi Onadeko, to arrest Igboho.

Reacting to this development via his Twitter handle, FFK wrote: 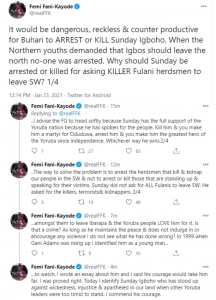