The Oluwo of Iwo, Rasheed Akanbi, has demanded N20 million from Governor Gboyega Oyetola as financial support towards his forthcoming marriage to a Kano princess.

Mr Akanbi conveyed his request in a letter sighted by Peoples Gazette after it circulated on social media overnight. The Gazette could not establish the original source of the document.

“I wish to remind your Excellency that this kind of royal wedding within two notable traditional institutions in Nigeria will require huge expenses, which necessitate support of state government financially, even logistically,” the traditional ruler said. “The estimated amount for the event is above N20,000,000.00.”

“His Excellency, Oba Akanbi relies on you for necessary consideration and approval on this request,” the letter added.

Mr Akanbi made this request after hosting the Governor Oyetola on Tuesday, promising him the support of the Iwo people in his second term ambition. It was not immediately clear whether or not the governor had agreed to release the funds, and his media aide did not immediately answer calls seeking comments.

Mr Akanbi is also the deputy chairman of the state’s council of traditional rulers and the president of the Iwo traditional council. He divorced his wife Chanel Chin in 2019 following a public disagreement that included allegations of substance abuse by Mr Akanbi. He denied the charges and said the woman was promiscuous.

Mr Akanbi’s request highlights how traditional institutions have been draining resources from public coffers to finance largely personal interests. Calls have intensified in recent years for the abolition of traditional bodies, especially less paramount thrones, in order to free up resources for poor citizens in need of improved health and education. 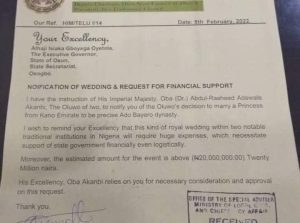