The controversial Politician, father of 11 children and the highest President Buhari’s critics however denied claims that he has dumped his present party PDP for the APC.

This was made known after Kogi state governor, Yahaya Bello in a viral video yesterday revealed that FFK as many love to call him as joined the APC.

Since the pictures where shared online, Mr Fani has been receiving serious backlash with lots of names calling.

Some referred to him as a betray and enemy in disguise.

But just like they say, ‘The Internet never forget’. We were able to get hold of Femi Fani Kayode’s old post where he said he will rather die than to join the APC.

This statement was made in 2019, barely three years after, Mr Fani is now speaking another language 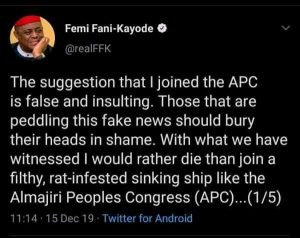 Meanwhile, an unconfirmed report says the People’s Democratic Party ( PDP ) has expelled Mr Fani Kayode, this we can not confirm, but we hope to bring you more details of this as it’s unfold.

The big question now is, will Mr Femi Fani Kayode die if he eventually joins the APC? This we will have to wait and see for ourselves.