My Son’s Case Is Spiritual -Doyin Okupe React To His Son, Bolu Coming Out As Gay

by Elizabeth
in Politics, Street Gists
0 0
0

Yesterday, January 21, 2021, son of a popular Nigerian Politician, Bolu Okupe shocked many when he openly came out as Gay.An act or practice that is highly unacceptable by Africans and Nigerian in particular.

Since his revelation which he made known via his social media handle,the buzz of reaction has been high with many praying for him, while some are blaming his upbringing for this.

However,few minutes ago, his Politician father who was an aide to former Nigerian president, Good luck Jonathan has reacted to his son openly coming out as Gay.

Mr Doyin took to his official Facebook page to express concern and shock over his son’s new Identity.

He revealed he gave him the name, Mobaoluwarin because he gave birth to him when he Doyin just gave his life to Christ.

He further stated that he knows it’s a phace in his Christian raise that he will pass.

Here’s what he wrote: 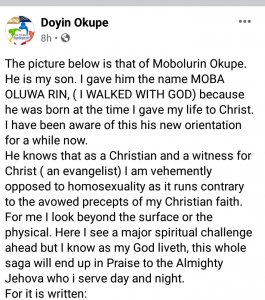 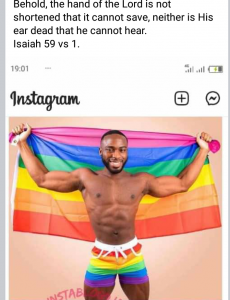 Meanwhile, he has been receiving lots of support from Nigerians, but some are of the opinion that his son’s new Identity was as a result of not having a proper family upbringing.