According to report by ace Nigerian filmmaker, Prince Ifeanyi Dikeh few minutes ago has revealed that Nollywood actor, Rich Oganihu is seriously down with kidney disease.

Prince Ifeanyi Dikeh who shared the news on his official Facebook page revealed that Mr Rich has been down with the illness for a while now.

Here’s what he posted: 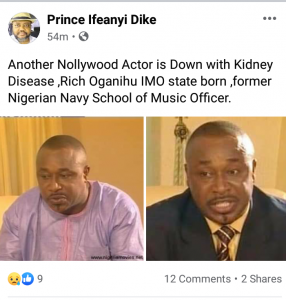 Recall that Rich who is a prolific actor back in the 90’s was accused of killing his billionaire business woman wife years ago. This is according to popular news portal, National Enquirer Magazine who revealed that Mr Rich is currently battling with a murder case in Abuja.

However, the actor who claimed to be one of the pioneers of Actor Guide Of Nigerian (AGN) who has also featured in almost 200 movies, is not only battling with the murder case on him, but now with Kidney disease.

This news is coming barely 48 hours of another Nollywood Actor, Prince Emeka Ani made a video seeking for financial assistance from Nigerians after he disclosed that he can no longer foot his medical bills.