We Have Been Under House Arrest For 6days Now – Ugandan Presidential Aspirant, Bobi Wine Cries Out

The presidential aspirant of the just concluded Uganda election, Bobi Wine has cried out of being under house arrest for six days now.

The young politician who lost to President Yoweri Museveni who has been in power for over 36years has claimed he and his family has been under house arrest for 6days without access to go out or come in.

Bobi Wine who took to his official Facebook page to raise an alarm claimed that they have run out of food and water, he also alleged that an 18 months old baby is also with them whom they’ve denied her father access to come and pick after she was dropped by them.

This is what he posted: 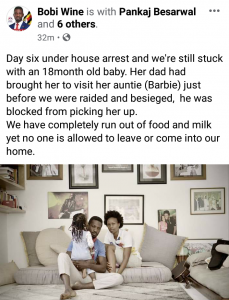 Recall that Uganda had their election over their over the weekend and Bobi Wine lost to President Yoweri Museveni.

However, this has caused serious reactions on social media by his supporters.