Years After, Davido, Wizkid End Long Time Beef As They Party Together At Lagos Nightclub

Another major beef in the Nigerian music industry may have come to end as a hug at a Lagos nightclub by Wizkid and Davido kindled reconciliation rumours.

A viral video showed how the duo shared a very “lengthy” emotional hug at a nightclub yesterday in Lagos, while surrounded by their crew.

Although the reason for their strained relationship remains unknown, it can be traced as far back as 2011, during their startup days in the industry.

In 2015, Wizkid and Davido performed together on stage for the first time and a few more times afterwards. However, despite uniting on stage the duo’s relationship still remained strained.

In an interview with on air personality Ebuka on Bounce Radio, Davido said his relationship with Wizkid “has never been from his path.”

Davido further revealed that their relationship went sour because Wizkid saw him as a competition.

“Do you feel like you became competition?” Ebuka had asked, with Davido responding, “Of course, definitely, he knows that and that could be the only reason he will be vexing at me because I have never done nothing,” adding, “I love Wizkid and I know he love me to too.”

Davido and Wizkid are not the only artists that have suffered from a strained relationship. In 2021, twin brothers Psquare ended their feud, and shortly after, African giant Burna Boy announced his reconciliation with Davido as well.

Fans of Davido and Wizkid have taken to social media to jubilate over their reconciliation and are hoping for a music collaboration soon. 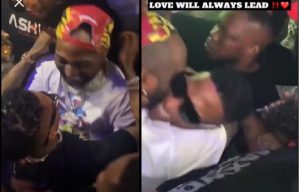