Controversial Senator, Dino Melaye has claimed that the only All Progressive Congress, (APC) man you can trust is the dead APC man.

The former senator who represented Kogi West Senatorial District shared a post on his social media handle to address those defecting from the People Democratic Parry, (PDP) to APC

Here’s what he posted: 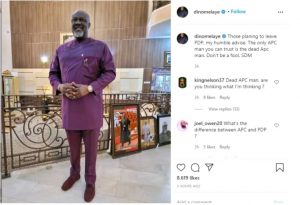 Recall that Dino Melaye was formerly an APC member before crossing over to PDP. Dino has now taken up a career in movie acting.