Reactions has trailed the locking of former Lagos state governor, Bola Tinubu after his page was locked by Wikipedia for ‘persistent vandalism’.

It was said that a Wikipedia page showing a short biography of APC Chieftain, Bola Tinubu has been locked after the age section of his profile was reportedly edited 84 times.

The age of former Governor of Lagos was edited several times following the controversy that trailed his 69th birthday celebration on Monday March 29. It was learnt that numerous accounts took to Wikipedia to edit Tinubu’s age from 69 to 79 after many social media users suggested that he is above the age he celebrated yesterday.

84 edits were carried out on Tinubu’s page on his birthday and most of them were on the age section of his profile.

The Cable reported that the protection level on Tinubu’s page was raised by Girth Summit, a Scottish Wikipedia editor who has worked on articles from more than 20 countries. Summit’s reason for blocking edit from the page is “persistent vandalism”.

Vandalism for Wikipedia is “editing (or other behavior) deliberately intended to obstruct or defeat the project’s purpose”.

The first edit was carried out at Lagos Island, before being done in United Kingdom, Ireland, Saudi Arabia, and a few other countries around the world. 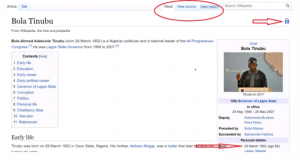 Feminism Is Why Women Get Beaten Up In Marriage — Iconic Nigerian Actor, Pete Edochie Says